INNOTECH equipped the spectacular Berlin building with 10 climbing routes for cleaning and maintenance purposes and 300 meters of rails. 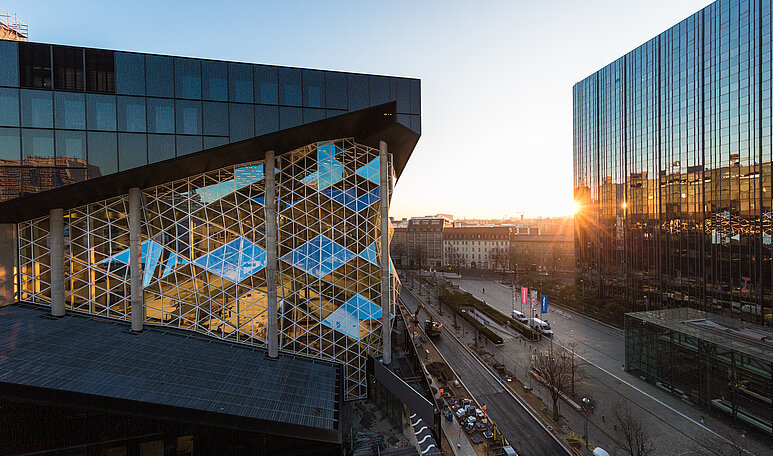 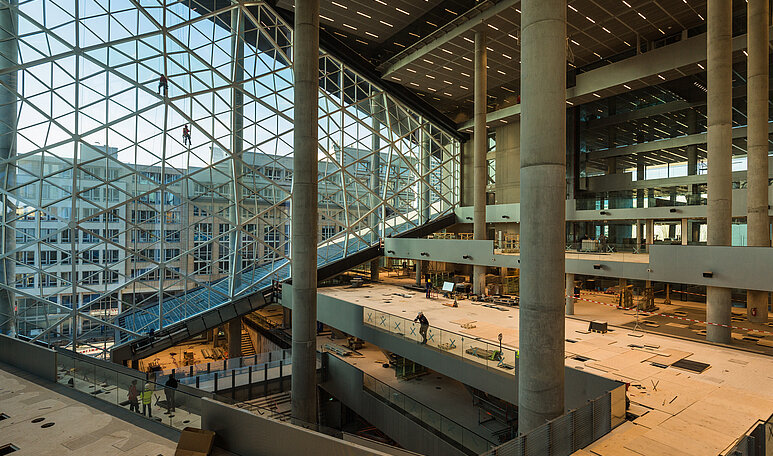 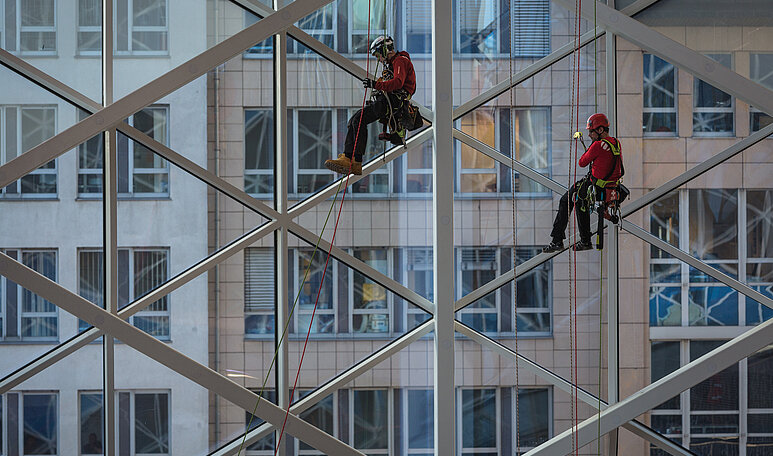 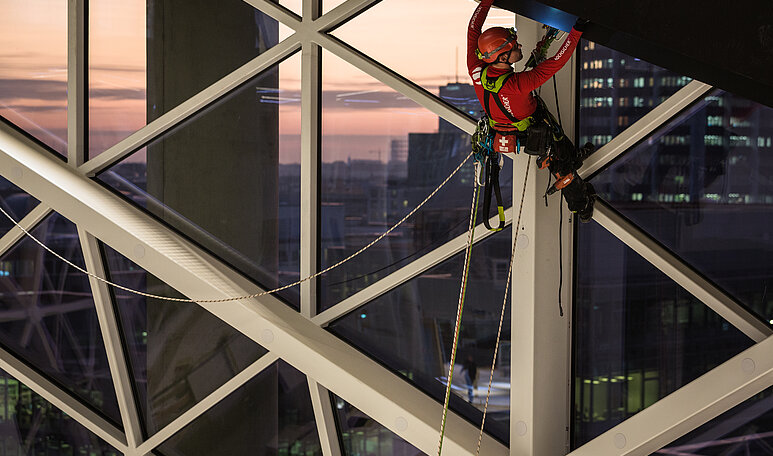 In 2020, the new Axel Springer building in Berlin will be completed after three years of construction. The black and gold cube designed by the Dutch star architect Rem Koolhaas and his Office for Metropolitan Architecture (OMA) with its expansive glass honeycomb facade now rises eleven stories high in the old Berlin newspaper district.

An architectural statement as a sign of the future of work

The black and gold block with a striking window front made from a wave of white triangles in front of a 45-meter-high atrium offers space for 3,500 employees. The different levels of the 13 floors protrude to a depth of 52,000 square meters into the enormous free space of the atrium, where terraces and bridges swing over several steps to dizzying heights. The atrium takes up about a third of the enclosed space.

It was precisely this structure that is considered a masterpiece of statics that we had to find a fall protection solution for ensuring smooth operation and maintenance of the building in the future.

Uniqueness lies in the complexity of the rope access technology

In 2 project phases, 10 climbing routes with over 300m of TAURUS rail were realized in order to ensure the quick and safe access to all facade areas for height workers during cleaning and maintenance work. The uniqueness of the project lies in the complexity of the implemented rope access technology system, which has worldwide not yet been implemented in this way.

An interdisciplinary team from sales, planning and technology has implemented numerous further developments and custom-made TAURUS components in cooperation with HOCHSICHER in a total of 3 years and more than 1000 working hours in order to secure the mighty glass courtyard with the floating terrace landscape.

In comparison to the competitor products, the TAURUS rail system from INNOTECH clearly had the edge in some crucial points. As part of this spectacular project, it was the only product on the market to convince with a three-dimensional bending of the rails and, at the same time, perfect running properties of the self-braking sliders. The multi-axis deformability of the rails enables on the one hand the serpentine rail guidance with countless curves, arches and elliptical elements in the interior of the atrium and on the other hand the fulfillment of the optically highest demands of the client.

The TAURUS GLEIT-H-11 rail slider, supported by an additional GLEIT-A-30 brake slider with DIN EN 353 fall protection function, enables safe rail access with just one pull rope. The additional redundancy in the longitudinal direction is as well guaranteed by the braked rail slider. 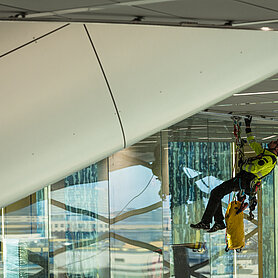 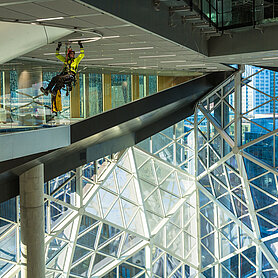 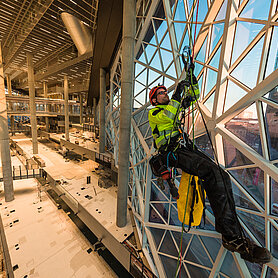 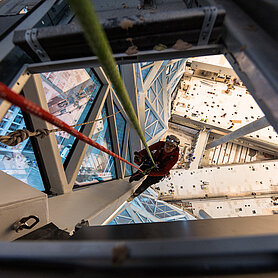 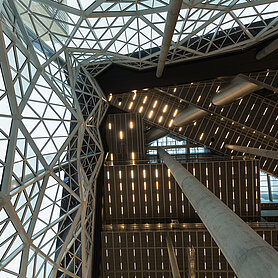 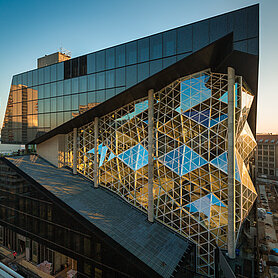 So far, the facades of architecturally demanding buildings have mostly been serviced and cleaned with the help of aerial work platforms, which is not only problematic for individual parts of the building, but also the ongoing operation in the affected rooms was considerably restricted by the work. Thanks to the new system, cleaning is trouble-free.

The maintenance of the facade is only carried out by specially trained building cleaners with additional qualifications for working at heights. The INNOTECH rope access system allows up to four height workers to work on the rail at the same time, which shortens the cleaning time enormously and thus lowers the costs for the operator.

In addition to safety, ergonomics for workers at height were also considered when planning the concept, which significantly reduces the likelihood of fatigue errors and work accidents.

For the spectacular photos, we would like to thank photographer Klaus Fengler, our installation partner Markus Füss and our colleague Peter Radner, who supervised this project.