Stylishly matched to the project’s architecture. 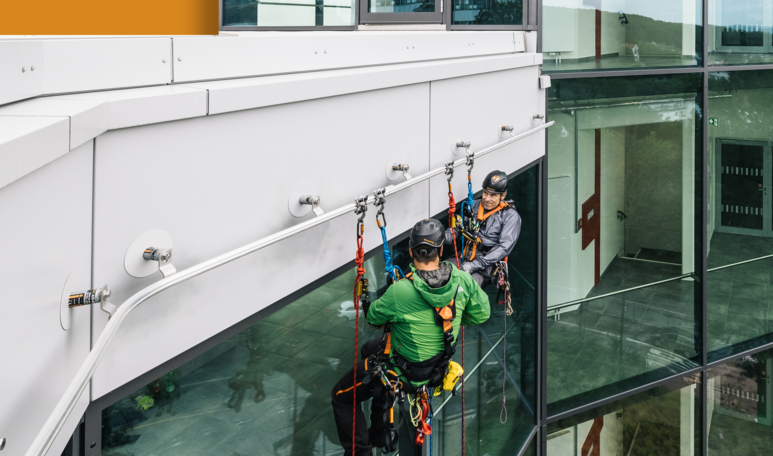 For every fall protection system, the focus is on saving lives. A holistic, sustainable safety concept for the facade safety system is the best possible gain for construction projects. At the same time, the safety system should integrate into the overall concept of the building, and complement the architecture.

On the basis of two best practice examples in which we played a leading role, we show you how to find the best solution in every respect for your company.

For the large ÖAMTC headquarters construction project, almost the complete range of INNOTECH products was represented, both outdoors and indoors.

Thanks to the financial planning and perfectly matched developments, not only does the project impress with its particular aesthetics, it also complies with the most demanding safety standards. An optimum interaction of standard and special solutions has been created:

The star-shaped complex of the ÖAMTC building created a number of challenges, for which the INNOTECH experts found and successfully implemented effective solutions:

Special facade safety systems were also installed in the interior of the building, and these enabled safe maintenance and cleaning:

Because of the building’s challenging contour, INNOTECH was selected as the partner for fall protection, because we developed a highly effective special solution. In addition, together with our partner, we developed the concept in full and overcame all challenges, thanks to our extensive network.

At the University of Wuppertal renovation of the glass and concrete curtain facades was necessary. In the course of this refurbishment, a special fall protection system was installed by INNOTECH to allow the cleaning of the facade combination. A number of challenges had to be taken into account when installing the facade cleaning system:

The problem was resolved through the development of a special solution. A combination of rail and cable systems overcame all technical problems.

Through the installation of the safety system, the cleaning and inspection tasks on the facade can now be performed, thanks to INNOTECH’s technical expertise. The project duration was around 18 months.

Both the customer and our partner, a large facade constructor from eastern Germany, are very satisfied with the communication during the project and with the implementation in general.

Through the superior quality of the products and implementation, the University of Wuppertal benefited in the following ways:

But all the same: This is a prototype project. INNOTECH continues to develop in terms of facade solutions. Thanks to the experience we have gained, we are able to implement the next construction phases even better, and to install the systems even closer to the facade.

Whoops, facade safety forgotten – what can be done?

Fall Protection for Facades: How Much Does it Cost?

All cost items at a glance.

How To Achieve the Optimal Invitation to Tender for Facade Protection