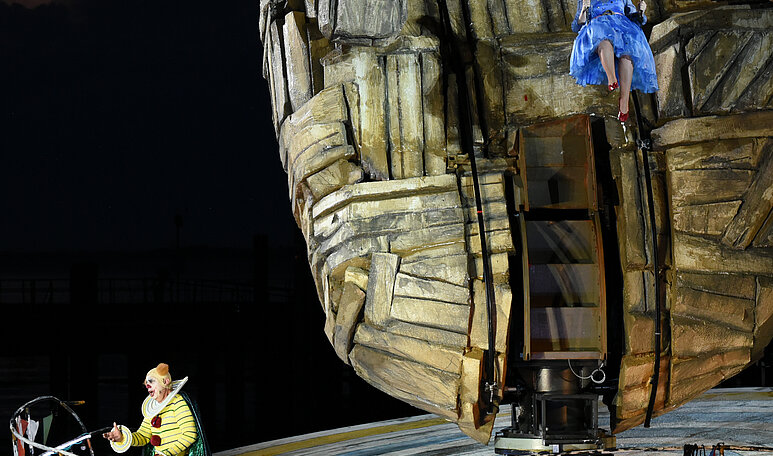 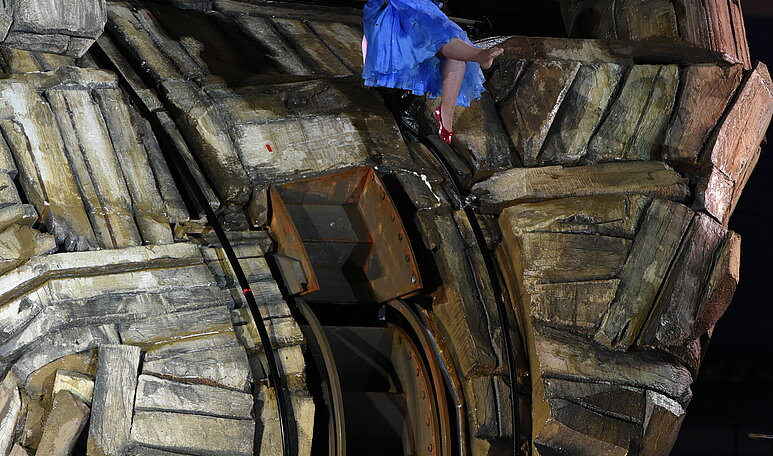 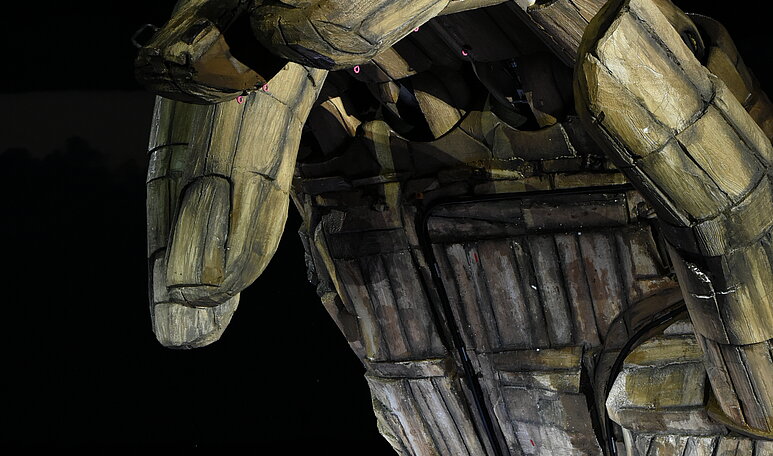 With its impressive lake stage and around 7,000 seats, Bregenzer Festspiele GmbH continuously attracts attention through its imposing stage settings and performances. In 2019 the new production of Giuseppe Verdi’s classic Rigoletto was finally on the programme. This blog post tells you about the connection between Rigoletto and fall protection.

From a technical point of view, the stage setting was one of the most sophisticated productions of the Bregenz Festival. To achieve this, stage designer and director Philipp Stölzl had 140 tons of steel, spruce, and other building materials converted into a 14 metre high clown’s head, around which the opera took place in three acts.

On its own, the clown’s eyeball was 2.70 metres wide, and on imaginary scales the face would have weighed an impressive 35 tons. His hands were around twelve metres in height, and the up to six metre long fingers of one hand could be moved using a hydraulic swivel drive. In one hand, Rigoletto held a captive balloon with a diameter of 13.5 metres.

The spectacular stage setting won great enthusiasm from the public, and required a very good head for heights from the singers. Throughout the performance, they sang and danced on the clown’s hands, as well as on other exposed stage elements, and they performed acrobatics at dizzying heights. Thanks to our fall protection systems, that all took place without any risk.

TAURUS ALLROUND was the lifeline on Rigoletto’s hand

In the team of Martin Fend, project manager for stage building at the Bregenz Festival, the safety of everyone involved is what matters most to those responsible. In the end, Martin Fend chose us as his trusted partner.

The decision was quickly made in favour of the TAURUS ALLROUND fall prevention protection system, a rail system which won out particularly because of its flexibility. It was possible to adapt the aluminium rails perfectly to the contours of the hand on the stage set. This allowed the performers to transition safely from the horizontal to the vertical plane on the palm of the hand.

In total, around 6 metres of TAURUS rail were installed on the back of the hand, with a further 10 metres on the palm. So that these could be integrated as inconspicuously as possible into the prop, the rails were anodised in black, and accordingly appeared to be the lines on Rigoletto’s hand. 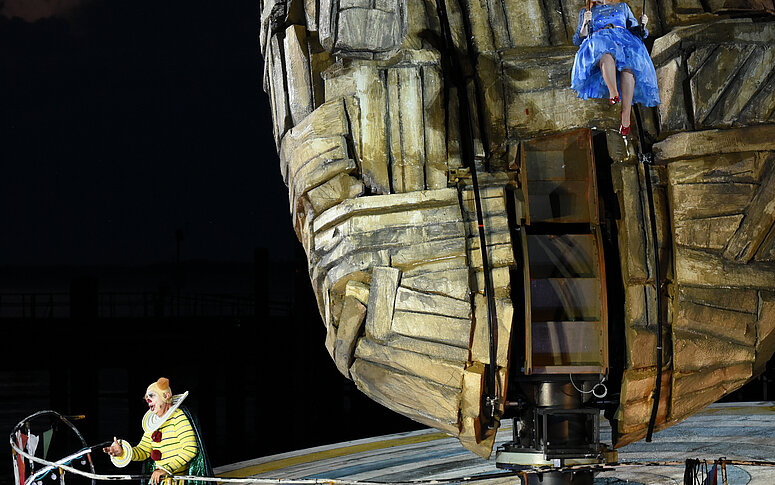 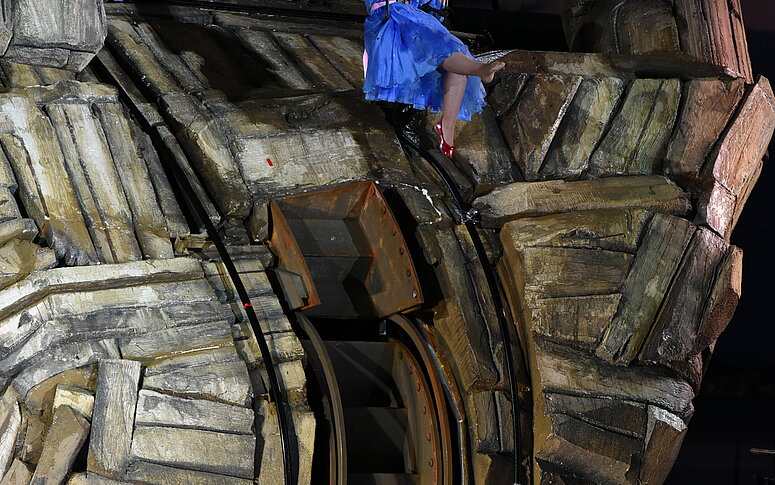 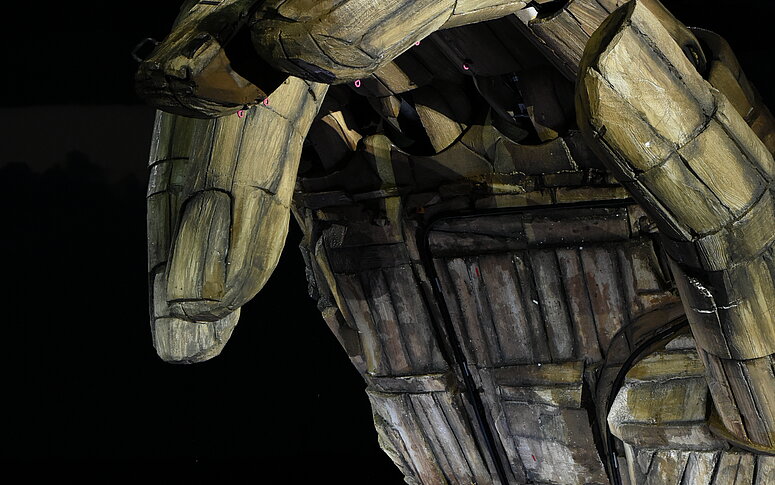 For the invisible integration of the fall protection system into the stage setting, all attachment points, and the system as a whole, had to be installed with millimetre precision, and adapted accordingly. TAURUS-BEF-30 and TAURUS-BEF-12 were used for fastening the ALLROUND system.

While they performed, the actors achieved fall protection through using the TAURUS-GLEIT-A30 slider and corresponding PPE; these too were invisible.

Thus secured, the opera stars were then able to move on the 12 metre high hand freely and as rehearsed, without putting themselves in danger, because in the event of a mishap the TAURUS system slider would have blocked immediately, and thus prevented a fall.

The actors’ freedom of movement was in no way impaired by the safety solution. This was a further, but centrally important, challenge in the project. After all, the objective was that the members of the public should be able to involve themselves wholeheartedly in the opera and events on stage, and this could not have been fully achieved if there had been disturbing elements.

The appropriate solution for every challenge

Martin Fend of Bregenzer Festspiele GmbH indicated that he was very satisfied with the result. Through the use of the INNOTECH rail system, not only could all performances take place smoothly and above all safely, but it was also always possible to perform every maintenance task on the highly complex hand in safety, thanks to the protection provided by the TAURUS rail system.

As the project manager reports, the system was chosen because of the versatility of the rail of the TAURUS system.

“The best possible solutions were quickly found for every challenge which had arisen from the overall complexity of the project”, states Martin Fend. “All 26 performances and 60 rehearsals passed off absolutely free of problems, and in complete safety”.

Protected while working on the special rail wagons

If the going gets steep, then the AIO Lifeline system is the optimum solution